In 1985 a 15 metre tall Tyrannosaurus Rex roamed around Launceston.

About 65 million years after dinosaurs were believed to be extinct, arguably the most apex predator in history was back terrorising humans across the North of Tasmania.

This T-Rex was born in a warehouse at St Leonards and was the brain-child of local fitter and turner Allan Limb.

"In 1979 I read an article in The Examiner about a palaeontologist who had found a large thigh bone from a T-Rex," Mr Limb said.

Mr Limb was immediately taken by the new information contained in the article - that it showed T-Rex's to be about double the height of their previously known size. 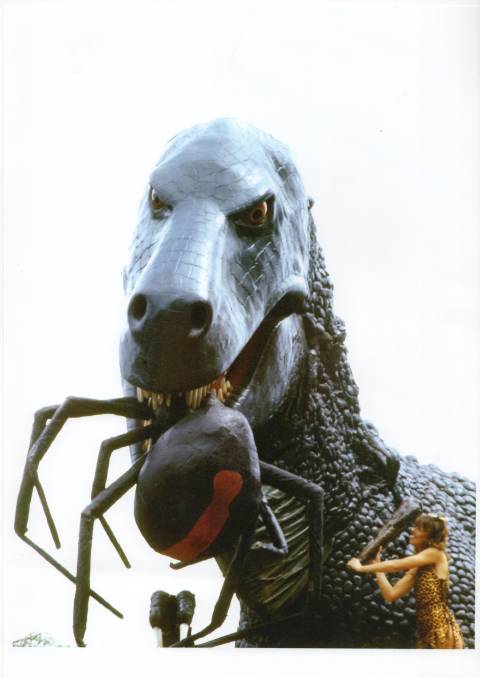 The new information concluded the Jurassic beast would have been about 12 metres tall.

"Gradually over a period of a couple of weeks I was tossing around about what it would look like if you had something that big, and a Tyrannosaurus Rex that looked realistic on the big screen," Mr Limb said.

"I did a bit of research to get a bit of an insight into the animal and what we knew about it and then started working out what it looked like."

Mr Limb's search to work out exactly what it looked like led him to a model developed by the British Museum. After getting in touch with them he had his own six-inch tall model from which he developed what would be the basis for his eventual 15 metre tall robotic beast.

From there he convinced his general manager Michael Clayton that investing time and money into the project was viable, and worth it. Mr Clayton vehemently agreed and work on constructing the beast started.

"We started with the head and went from there," he said.

"The legs were the next thing because they were a very involved thing in terms of how they actually mechanically work to make it stay upright. They were a lot more involved than you'd think."

"The skin as well was another work of art on its own. There were a lot of pieces and we weren't just stretching fabric it was actually springs behind fabric and it could close up and there were big scales that slid over each other and all different sections and different areas."

Mr Limb was aware of the gravity of the construction but talked casually through its intricacies like Isaac Newton explaining his own laws of physics.

In actuality, it took Mr Limb, Mr Clayton, and a team of about 100 workers four-and-a-half years of dedication, blood and sweat to create a machine that was so far ahead of its time that NASA went on to develop similar technology including elements of the dinosaurs telemetry.

The 15 metre tall replica contained over 70,000 moving parts and four kilometres of wire, weighed about 18 tons, could crush mock bones and had a roar recorded from the sound of a leopard.

It was also able to walk, bend to the ground, pick up objects and move all body parts like the real animal. 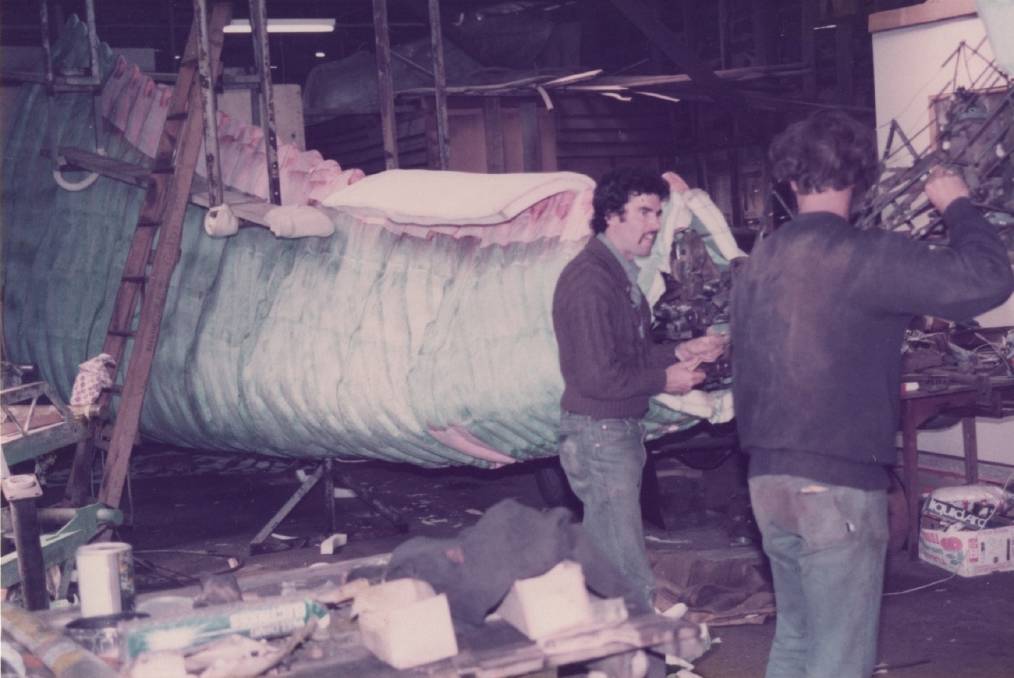 Mr Limb and a worker during construction. Picture: Supplied

The dinosaur was so big it had to be transported from the warehouse to the Launceston Showgrounds where it was pieced together and modified. 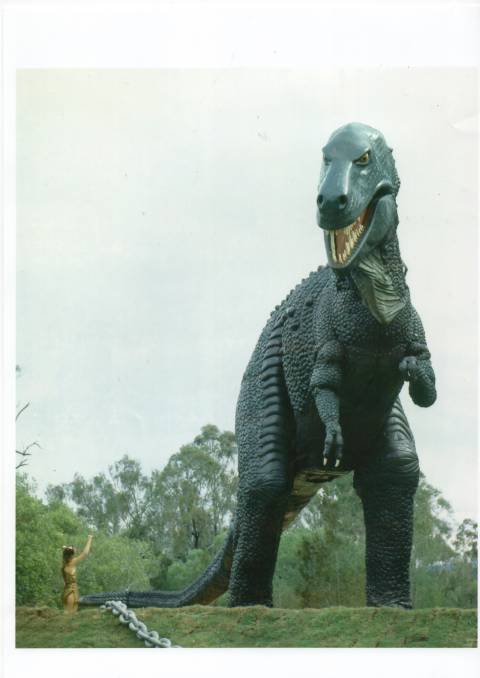 Mr Limb's dinosaur in the movie he shot in Queensland. Picture: Supplied

After being pieced together it became a public attraction and drew huge crowds.

Realising the T-Rex's potential Mr Limb transported it to Queensland to a site developed for it and went on show.

The machine was so well received a tour of the USA fair circuit was on the horizon.

First, though, it was taken to the Adelaide Show as a test. The test was widely successful as the dinosaur dominated the show scene.

Consequently, a film studio approached Mr. Limb and made an offer of a feature film with T-rex as the star.

Ironically, and unbeknown to Mr Limb, on the day that the film deal was locked into contract, an Adelaide man that was using an oxy-welder nearby the dinosaur caused the beast to go up in flames.

Within moments the fire was out of control and the creation was extinct.

After arriving home, Mr Limb was confronted with the devastating news that his famous creation was completely destroyed.

Mr Limb said he could remember the moment vividly.

"I was really just so upset. What went through my mind was 'well we're not going to have another for at least four-and-a-half years," he said.

"It put a halt to everything, that did."

Six years after its destruction Mr Limb began legal proceedings to attempt to recoup his losses. After an eight year legal battle he was awarded $31.2 million by the Supreme Court of South Australia. 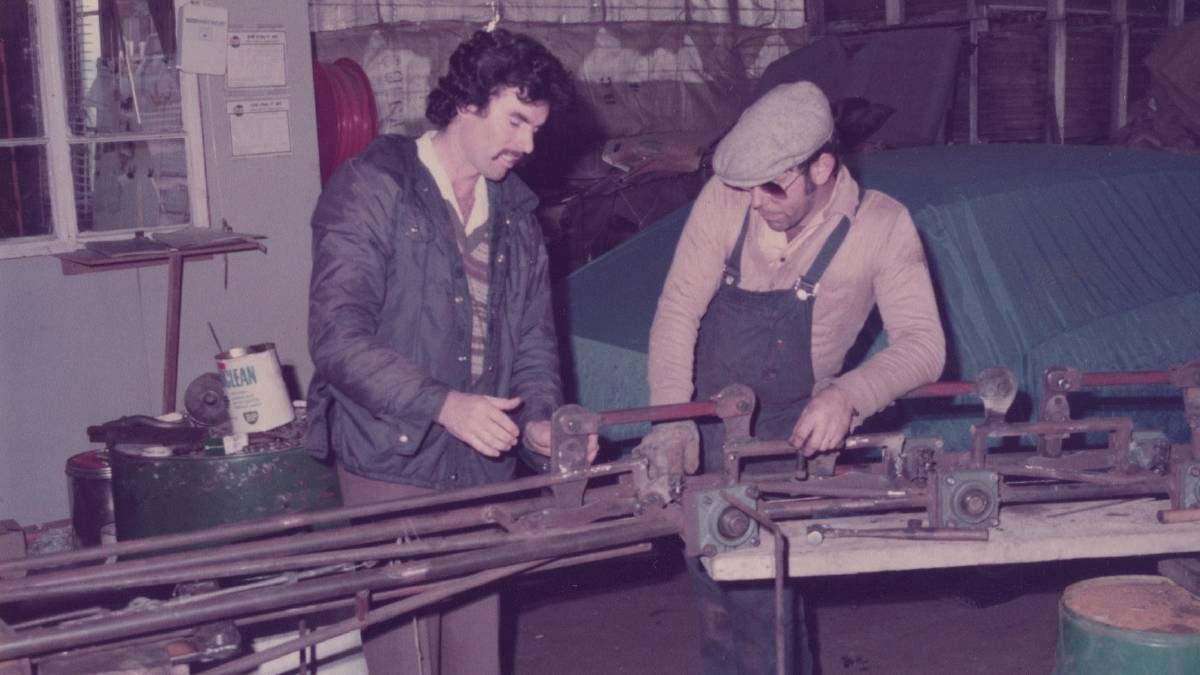 During the case it was deemed fire extinguishers that could have saved the T-Rex did not work, and fire hoses did not reach.

A photo exists of the charred skeleton of the T-Rex and it is as bleak as one could imagine.

The judge who presided over Mr Limb's case commented in his summary:

Despite the heartbreak and heartache, Mr Limb said he was glad he embarked on what turned out to be his greatest mechanical achievement.

"The notoriety we got when we had it on the mainland - people use to hoard over the thing ... kids used to cry". 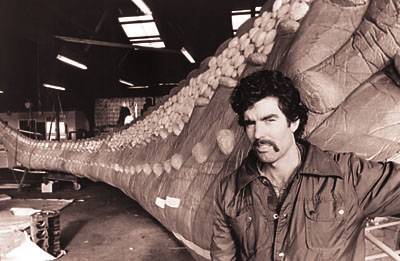 Mr Limb with the dinosaur in 1983. Picture: File

Mr Limb's story, and the Greek tragedy that the life of the great T-rex turned out to be is the subject of a BOFA film festival documentary by local filmmakers Luke Scott and Zara Dawtrey.

Ms Dawtrey said putting the film together was a privilege as it gave her and Mr Scott the opportunity to share Mr Limb's incredible story with a new generation.

"The people of Launceston deserve to know about Allan's remarkable achievement," she said.

Mr Scott said exploring the story was as interesting as making the film.

"We didn't know a lot about it, we just knew that Allan had built a robot dinosaur," he said.

"We didn't even really know what happened to it. It was just a really interesting experience.

The film can be viewed at the BOFA film festival page as part of the "stories of Tasmania".

This story From triumph to tragedy: The little known story of Launceston's robotic T-Rex first appeared on The Examiner.