Matthew Evans wants us all to get our hands dirty. He wants us to plant something and watch it grow. It doesn't have to be a carrot - although he thinks carrots are a miracle thing - it could be something as simple as some herbs in a pot on your balcony, or a pot plant in your bathroom.

And he wants us to pay attention to what it's growing in.

"Anybody who grows plants has this reverence for soil," he says.

"When you see something come up out of soil and realise the impact you can have on soil and how important it is for what you want to grow, whether that's a cabbage or a rose bush or a whole forest, it sort of makes you realise how important soil is."

The former chef and food critic, now farmer and activist has turned his attention to what lies beneath our feet.

Soil: The Incredible story of what keeps the earth, and us, healthy is his ode to the thin veneer of earth that gifts us life.

"Soil is invisible, much of the time. It doesn't rate as sexy. Most people don't see it as vital, despite its role in protecting us, sustaining us and healing us," he says.

"Soil disappeared from our consciousness as we separated from the land, from the hand-reared nature of our food. As we moved from growing to just consuming, we took our minds off what the subterranean ecosystem needs to thrive. What it needs to be its best self. "Worse than that, we've continually treated soil like dirt. And soil won't thank us for the slight.

"If we don't tend to the land with a mind to all the life it contains, we risk turning more soil to dirt. And that could well come back to bite us."

Soil is an incredible story. It's part warning, part lament, part manual full of hope and optimism. For too long we've over-cleared, over-grazed and over-ploughed our topsoil. An estimated 100 million square kilometres of Earth is covered in topsoil (about a quarter of all the land on the planet). However, only about 7.5 per cent of the Earth's surface is available as potential agricultural land to grow our food. The rest is ice, water, stone, too dry, too wet, too hot, or covered with cities.

On top of that, close to 40 per cent of agriculture worldwide has been abandoned due to soil infertility. Some scientists predict that there's only enough topsoil left for the next 60 years, as we lose a soccer pitch of topsoil every five seconds.

He looks into the science of soil, the role it plays in photosynthesis, and in the production of carbon, in sugars, all of which are vital to not only food production but humans' existence as a species.

He talks about the life in soil. How in every shovel full, there are more species than can be found above ground in the entire Amazon rainforest, the most biodiverse ecosystem on land. How in every handful there are 5000 insects, arachnids, worms and molluscs; 100,000 protozoa; 10,000 nematodes; 500m of plant roots; 100 billion bacteria; 10km of fungal filaments.

He's come to the conclusion that it is indeed a living organism, one we're not taking very good care of. Soil: The Incredible story of what keeps the earth, and us, healthy, by Matthew Evans. Murdoch Books, $32.99.

"I walked away from all this research more worried than when I started," Evans says.

"When I was looking at the numbers ... I started thinking this is insane. Here in Australia we lose 1.5 billion tonnes of topsoil to water erosion, another 1.4 billion to wind erosion ... the numbers are absolutely staggering and immeasurable.

"So I tried to translate into railway cars ... if you loaded all the soil Australia loses each year to water erosion into railway cars, the train would stretch around the globe seven times.

"It's estimated that Australia has lost half its topsoil in just over 200 years since Europeans arrived.

"That really really does give you cause for concern."

So what can we do?

"People haven't gone out of their way to ruin topsoil, that's not what it's about.

"Most farmers believe they're looking after the soil, so when they've added chemicals or used herbicide, or whatever, they're trying to get food from the land at a price that people pay, and not ruin the land.

"Any farmer today who isn't looking at soil as a living entity, isn't thinking about how to sustain the amount of soil they've got, and how to replenish what's been lost, is putting themselves and their descendants out of a job." 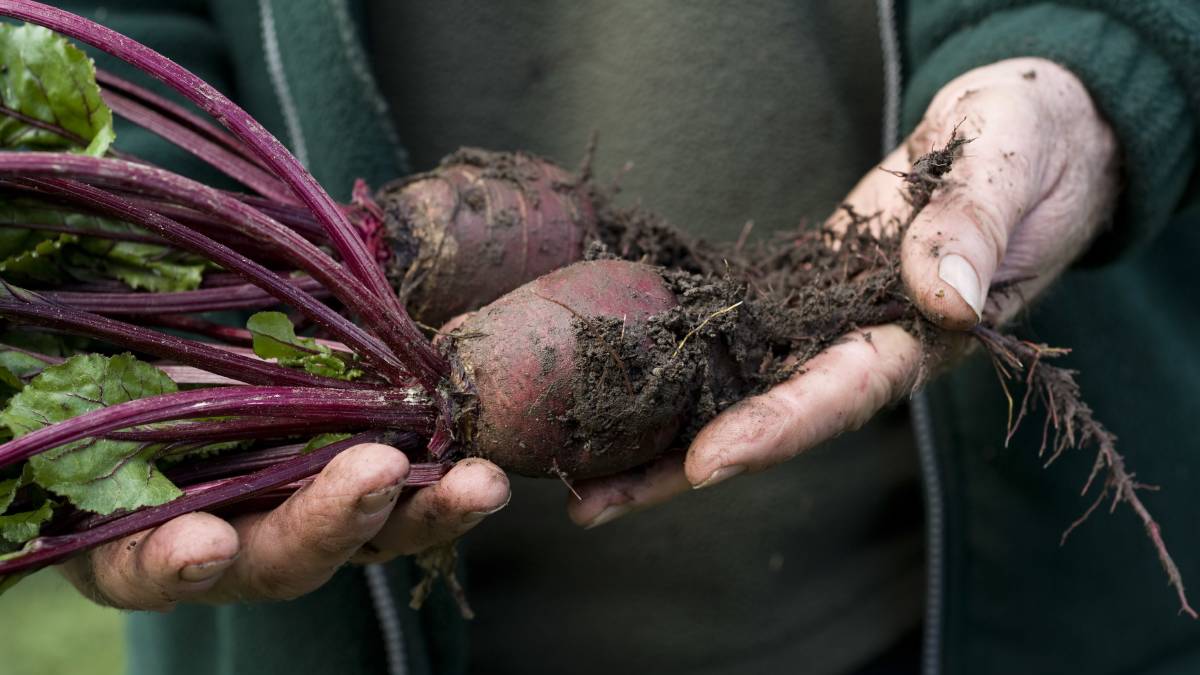 We should all think about growing something in our own soil. Picture: Alan Benson

He remembers the first few months on Fat Pig Farm. In 2011, Evans and his partner Sadie left Sydney, buying the 28 hectare plot with the intention of converting it from grazing land to a mixed holding, raising pigs, cattle and sheep and a market garden.

"When we bought the place, the grass was emerald green and almost waist high. To our untrained eyes, it looked like really good growing land," he says.

The scrubby hill behind the farm was nicknamed Bandicoot Hill, "which takes its moniker from the local marsupial, because the soil's so poor you can't even grow bandicoots on it".

They've worked hard to improve the soil on the farm, which was compacted, full of clay, and little else. Sadie is a firm believer in composting.

Closer to home we can all do our bit. It's not just farmers and governments and scientists who need to be thinking about soil.

"Every bit of soil counts, it doesn't matter whether it's a pot plant, a little raised garden bed or a cattle station. 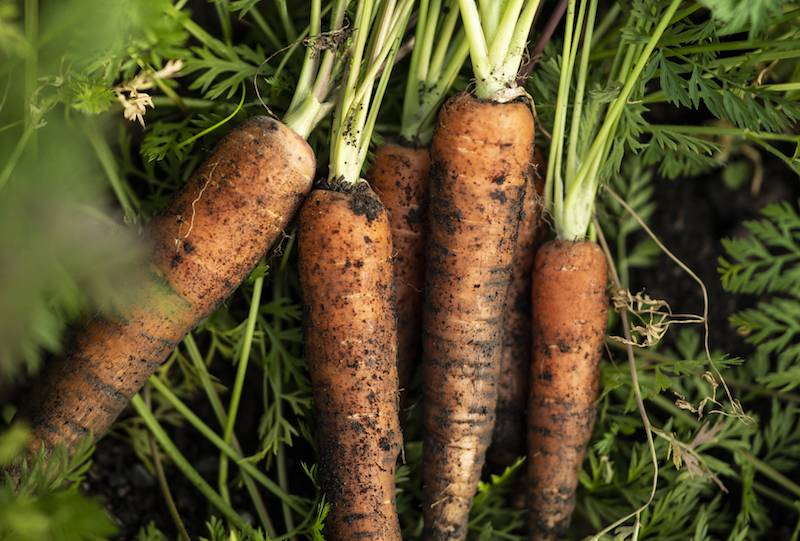 There's nothing quite as satisfying as pulling a carrot from the soil. Picture: Alan Benson

"And all of those billion and trillion things living in the soil are going to use that carbon and draw it down into the soil to create more topsoil.

"And I've learned too that humans can improve topsoil, we have the capacity to take your patch of dirt, and through amending the soil, bringing in carbon, things that are rotted, compost, perhaps even bringing in a little topsoil to get yourself started, you can actually build soil in a way that's so much faster than nature. And it's a beautiful thing to take control of."

He says we should all be growing more of our own food.

"People belittle home gardeners, saying they can't feed the world, but we can feed a lot of people with home gardens.

"More than a billion people around the tropics feed themselves from their domestic gardens ... yes the tropics have a better growing season than say southern Tasmania, where you might have a small garden where things stop growing for a while because it's too cold, but we can supplement that."

"The thing about urban growing is that it cares for soil, and the ecosystems that soil can support. Sometimes a garden is purely for visceral pleasure; the shrubs and trees that make us happy. Sometimes it's groaning with fresh produce that can embellish any meal. Either way, underneath a well-tended garden the soil is humming with life, storing carbon, cleaning our water, freshening our air. It can also nourish us physically, too. 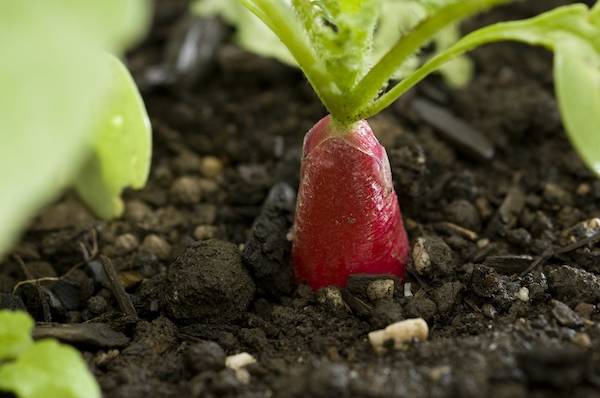 A radish pokes it head out from the soil. Picture: Alan Benson

"Caring for soil is a very personal contribution you can make to your well-being. It's a very tangible act, where what you do affects you mentally, physically, and perhaps even spiritually.

"It's intellectually stimulating, you're exposed to the mood-enhancing capacity of soil microbes, and the end result is food that is better not just for you, but for the world."

He shares in the frustration felt by soil scientists over society's inclination to look outwards and upwards rather than down beneath our feet.

"There's this obsession with Mars, when we're turning parts the world into a moonscape," he says.

"There's this idea that we need to find another place to live, which essentially doesn't have any topsoil and can't support us. All the money and effort that's going into it, whether it's Jeff Bezos, or Elon Musk, or whoever. And on the other hand, these underfunded soil scientists are struggling to comprehend the very thing that has nurtured us since the beginning of time."

He agrees that soil does have an image problem.

"It was part of my ambition to make soil, if not sexy, than at least interesting. This idea that soil is just something that gets under your nails or something you have to rinse off the carrots, it belittles it. Talking about all these big picture things, about what happens in soil, about what it does, is the way to make it relevant.

"Because until we care about soil, until we know its stories, we're not going to do anything to improve its fate."

My own vegetable patch, a couple of raised beds in a small courtyard, is almost bare this time of year. There are a few straggly spring onions, some spinach that keeps on sprouting new leaves despite the frosty mornings. I finish reading Soil as I sit outside in my garden, with a cup of tea and the early afternoon sun on my back.

I reach into the soil and scoop out a handful. It brings me joy knowing more about what is happening here. What needs to happen next. I feel childlike, harking back to those days where we'd dig and make mud pies, where we'd search for worms, and not worry about our nails getting dirty.

Perhaps soil does have an image problem, but it's vital we heed the message.